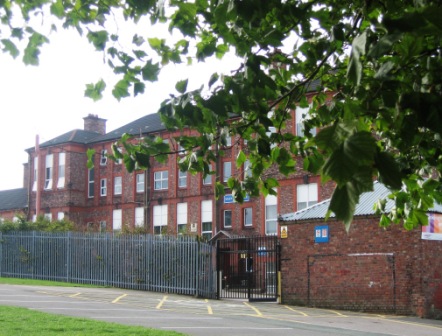 I started at Major Lester County Primary School (now Hope Valley) in September 1953. Every new boy and girl in the Infants Department began life in ‘The Hut’ – which stood on concrete stilts in the playground. This was long and narrow and held two classrooms, separated by a central door that was approached up a flight of steps.

The highlight every morning was not one of our lessons, but a bottle of free school milk that would be warmed on the giant radiators in the winter. Many kids go to nursery or pre-school now at the age of three, but five was the earliest starting age then, and the easy and relaxed atmosphere in ‘The Hut’ was meant to ease us in, ahead of the much more disciplined regime when we moved across to the ‘big’ school.

We would always be read a story before mid-morning playtime and would be told to put our heads down on the desks, shut our eyes and relax. One morning, I fell asleep and woke up with the room completely empty. Regardless of the high-pitched racket from the kids out in the playground, I thought I had been abandoned and locked in, and my screams soon had the teachers rushing in thinking a murder was going on.

This apart, it was a lovely environment and I couldn’t wait to get to school in those early months. My mother was soon allowing me to walk to school myself, even though it was a three-quarter-mile trek including the crossing of the busy St. Domingo Road. These days, most kids are dropped off by car and never permitted to play out alone, but youngsters were allowed much more independence then. It also became routine to get into the playground half an hour or even an hour early to take part in football matches that had no restrictions whatsoever on the numbers playing, their size or their age.

This meant you had to be talented just to get a kick and was the breeding ground for some outstanding players, including Liverpool FC’s double European Cup winner, David Fairclough, and my own class mate, Ray Johnston, who also joined the Reds. The Anfield football ground of Liverpool FC was just a few hundred yards away up Walton Breck Road, and the Goodison Park home of Everton FC was equally close along Walton Lane.

I settled into life in ‘The Hut’ and at the start of every day would stand to the side of the steps leading up to the entrance door, waiting for the whistle to go. One morning, I found myself completely soaked when a cleaner inadvertently threw a mop bucket full of filthy soapy water over the side of the steps. Three minutes later my mother was stunned to see me standing outside the front door in Melbourne Street, dripping wet. Such is growing up.

At the end of that first year I said farewell to ‘The Hut’ and moved across to Major Lester’s main school building. In my final two years I would move ‘upstairs’ where the boys and girls were now divided into two separate camps.

My teacher, as I approached my final years, was the inspirational Jim Harker, who worked under the guiding hand of six-feet plus headmaster, Arthur Corrin. I have already mentioned Mr. Corrin’s ‘phone monitor’ routine for boosting your confidence. He was also a fanatical film-maker, using an old reel-to-reel cine camera.

Forty years after I had left Major Lester as a confident ten-year old, I returned as a school governor to try and put something back in, after taking so much out as a young boy. At my first meeting, a fellow governor said that she had just watched a video that showed me in class as a nine-year old, around 1957.

I laughed, and pointed out that recorders were not invented until the 1990’s, but this turned out to be a compilation of many of the old films taken by Mr. Corrin, transferred to video, and I was given a copy.

Later, I sat at home and was transfixed by the footage. In particular, I was stunned to see my old Major Lester classroom with the camera panning round to eventually point directly back at the front-facing individual desks, occupied by 38 eager ten-year olds. It closed in on my face, and I was absolutely stunned to have such a magical memory of my childhood from a time when we rarely took photographs at home, let alone cine movies.

Of course, these were the days before the phrase ‘political correctness’ was invented. Every school had a ‘Fatty’, and the only vague look of surprise you would get was when you knocked on his door and innocently asked his mum: ‘Can Fatty come out and play?’

Our school took it all a stage further. For Mr. Corrin’s cine exploits the ‘Annual Eating Contest’ was staged in the playground, with a sheet on the ground, laid out with tasty cakes, with the boys eagerly waiting for battle to commence. It was “CAMERA, LIGHTS, ACTION” before an incredible bun-fight ensued, naturally won by the ‘Fatty’ who was then presented with his own small silver cup. Of course, the lads all tried and failed to lift him shoulder high for the camera, amidst roars of laughter. The most contented lad of all was ‘Fatty’, and this will tell you that it was not about bullying or ritual humiliation, although any headmaster trying it now would instantly be sacked.

We also had the ‘Annual Boxing Tournament’ filmed in Stanley Park. Again, it was a stage show for Mr. Corrin’s cine lens, presented as a battle of opposites; the small, weedy kid against his over-large opponent.  The agile small kid would duck all the right and left hooks of his giant rival before scurrying through his opponent’s legs, tapping him on the shoulder, and then leaping up to deliver the obligatory knockout blow.

Other bits of footage showed days out in the sand hills at Freshfield, where we staged a full-scale pirate adventure, complete with hidden treasure, to fire our imaginations.

Finally, there was film of our annual trips to the Isle of Man where we enjoyed our first ever ‘proper’ holidays; all part of the learning curve imposed on us by outstanding teachers like Mr. Corrin and Mr. Harker.

With their help and guidance, I would ultimately pass the now defunct 11-Plus examination and transfer to Evered High School, in Walton. The kids who didn’t get through all went to the lively Venice Street Secondary Modern in Anfield, which turned out a talented army of metal workers, plumbers, electricians, and apprentices of every sort. There is an age-old debate as to whether the 11-Plus selection process somehow contrived to deny kids rather than enable them.

What cannot be denied is that the grammar school system gave boys and girls from working-class backgrounds an opportunity to take a new direction in life. Youngsters excel in different ways and have different strengths. To force everybody into a single comprehensive system as a “one-fits-all” solution was a mistake, in my view, and one that we are still trying to come to terms with today.

Of course, there are still many fantastic educational establishments in the city and my old school, Major Lester, now Hope Valley, is one of them. Times change and it can be dangerous and futile to dwell too much on the past.