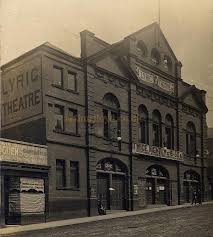 The entertainment palaces of yesteryear feature in a chapter of As a young boy, I never missed an opportunity to investigate every inch of the district I was brought up in. I was like a taxi driver doing the ‘knowledge’ – without the taxi!

I wanted to know the name of every street, understand every short cut to get there, try out every playground, and generally build up a powerful mental picture of the area where my father, grandfather, great grandfather, and great great grandfather had brought up successive generations of the Rogers family.

I was never bored because Liverpool 5, with its famous roads and steep streets, was such a remarkable place to live and explore. Every now and then I would come across something that really captured my attention, or that I never fully understood.

For instance, whenever I found myself in Alvina Lane, a non-descript back street between the more famous Everton Valley and Walton Road, I was always fascinated by what was clearly the back wall of an old building whose frontage had clearly been on the Valley itself.

In reality, it wasn’t very special, except for an inscription above an old entrance that leapt out at you . . . STAGE DOOR.

I’m sure that the site was being used at this time as a garage or storage facility for demolition firm Rainfords because I remember large trucks going in and out. But what about that sign, suggesting this was originally an old theatre.

What I could not have known as a young boy was that I was looking at the site of a former auditorium, built in 1897, that could accommodate a seated audience of up to 2,000 people. This was Everton’s famous Lyric Theatre and apart from that Stage Door sign, there was little else to suggest that this had been a hugely popular local entertainments venue.

These days, when most people turn up the steep gradient that is Everton Valley, many of them on their way to our two modern theatres of dreams – Goodison Park and Anfield – they simply have no idea that a major entertainments venue once fronted out onto the Valley on the left hand side.

Ellis Brammall Jnr. was the man who launched the Lyric when Queen Victoria was still on the throne. His other claim to fame was linked with the even more well known Shakespeare Theatre in Fraser Street off London Road. The Lyric’s impressive frontage of terracotta brick work with three large arched entrance doors led theatre goers into a large foyer that featured electric light candelabra, impressive hugely impressive at the time.

At first floor level, five arched windows looked out across Everton Valley. The venue was served by the tram system although most customers were drawn from the densely populated local streets. The side wall, facing down the hill towards the junction of Netherfield Road North, Kirkdale Road, and Walton Road, carried a massive painted ‘LYRIC THEATRE’ sign. A more decorative sign was positioned high above the first floor window arches on the Valley frontage.

The excellent book ‘Liverpool Stage’ by Harold Ackroyd reveals that inside the auditorium the ceiling was dotted all over with electric lights. Curved fronted boxes were either side of the impressive dress circle. The Lyric opened on Boxing Day 1897 with two performances of the pantomime Blue Beard.

The boxes could be booked in advance for one guinea (21 shillings, or £1 and 5 pence in modern money) which would have been a king’s ransom for most people at that time. The orchestra stall seats were two shillings (ten pence), the circle seats one shilling and sixpence and the gallery sixpence.

The Lyric mainly staged variety shows, with occasional plays.  But the advent of the cinemas challenged the audience numbers and the theatre itself had to move with the times, renovated to become the Lyric Super Cinema in 1921. However, even this venture was short-lived and no application was made to renew the cinematograph license in 1924.

Another refurbishment followed in 1925 when ‘live’ entertainment returned with a revue entitled ‘There You Are Then!’

Famous Liverpool comedian Ted Ray appeared at the Lyric in 1927 for £7 a week. But when the Liverpool Fire Brigade produced a report suggesting that there was a hazard because of unsatisfactory exit points, the theatre closed for the last time on 19 November 1932.

The building was used as a warehouse, only to be destroyed by enemy bombing in the Second World War. The site would then be used by Rainfords, which brings the story up to date with my fascination for the ‘Stage Door’ sign at the back.  Harold Ackroyd also indicates that the words ‘6.40 Twice Nightly 8.85’ were painted on that remaining wall.

I just know that it was a thrilling thought for a young boy that a major theatre had existed on this site with all the magical thoughts this conjured up.

Another site that continues to fascinate me, the destruction of which is referred to in an earlier chapter,  is just over half a mile away down the hill on that famous triangular piece of ground at the junction of Scotland Road and Stanley Road – the Rotunda.

Everyone knows where it is, but unless you are of a certain age, you possibly don’t know its rich theatre history. As a kid, I always saw the ‘Rotunda’ as a famous tram and bus junction. Indeed, the name is burned into my mind because my father was once knocked down there by a motor bike early one morning, although he lived to tell the tale.

The doctors’ surgery I attended as a boy – run by people like Dr. O’Brien, Dr. Smart and Dr. Sytner – was directly opposite what would have been the back of the old theatre on Boundary Street.

But the Rotunda has always been derelict in my living memory, the building having been completely destroyed by German bombs on 21st September, 1940.

An old pub, renowned for its local vocalists, was the starting point for entertainment on the site in 1863. A more extensive upper floor soon accommodated a bigger stage and, after further construction work, the Rotunda Music Hall was opened in November, 1869.  First class artistes were engaged and the Rotunda’s pantomime season was renowned. The theatre also staged many successful plays and, as its popularity grew, a new gallery, balcony, stage and private boxes were erected.

However, disaster struck when the theatre burned down in 1877. Ironically, this opened up the opportunity for the well know proprietor, Dennis Grannell, to plan an even bigger and grander theatre on the site. The end product was the impressive five storey triangular building that became such an important local landmark until that Second World War enemy air raid brought the curtain down on 62 years of almost continuous production.

Once again, ‘Liverpool Stage’ author Harold Ackroyd reminds us of the Rotunda’s splendid facilities. Above ground level, the frontage was of the kind of mixed light and dark brick used in many of the extremely large and impressive main road public houses in the area. Internally there were two bowling alleys in the basement; the ground floor featured the foyer, a billiard room and a public house (at the curved Scotland Road end); staircases from the foyer led up to the first floor stalls, and the landings continued up to the dress circle, amphi-circle and gallery. The theatre capacity was 1,790. Not surprisingly (this was the Scottie Road area) a licensed bar was provided at the rear on all floors except for the gallery.

The interior was reconstructed in 1899 after the theatre was acquired by the famous Bent’s Brewery Company. The Rotunda became a leading provincial centre for melodrama, but the entertainment package was varied, and legendary comedian Robb Wilton was a star attraction as the call grew for more light entertainment.

It was the unique appearance of the building, with its distinctive flat iron shape, that made it so impressive. The site, while famous for simply being the ‘Rotunda’, feels slightly sad today. But what a venue it must have been in an era when the district had many such entertainment establishments, listed below:

Of course, some of these old theatres would eventually succumb to the age of the movies and re-open in different guises.