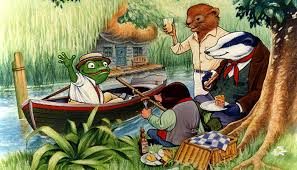 It’s Lost Tribes  story time and so, if you are sitting comfortably, I will begin. This is the true tale of ‘Ratty’s first Christmas’ with apologies to Kenneth Grahame’s fictional characters in the 1908 children’s classic ‘The Wind in the Willows’

I have always loved the eccentric Edwardian meanderings along the river bank of Mr Toad, Ratty, Badger and Mole. My favourite was always Ratty, actually a water vole with a relaxed and friendly manner, the perfect counterbalance to Toady’s flashes of arrogance and conceit.

Because of Ratty, I found myself, as a six-year-old in the Fifties, quite taken with the rodent population in general. It was just as well because in the back entries of our Everton terraced houses there just happened to live several families of ‘Ratties’ and the local folklore about them was in stark contrast to that crafted by author Grahame.

We kids would go into a huddle under the yellow glow of a street lamp  to share our Christmas present dreams and discuss the ‘Ratty’ warnings as espoused by our parents: “Never corner a rat in an inner city back entry, or it would leap for your throat to make its escape.”

This was never mentioned in ‘The Wind in the Willows’.  Are you still sitting comfortably? In 1955, I came home with my parents one night and we went straight into the parlour, my granddad living in the kitchen at the back. I couldn’t wait because we had our first fully bedecked floor to ceiling Christmas tree.

Sitting in the middle of the room, mesmerised and looking up at our flashing pear-shaped fairy lights, was ‘Ratty’. He had never visited before. He had certainly never been invited – and he never moved. At least that is until my dad grabbed a large poker and chased him around the room.

Maybe it was because of Christmas that Ratty never jumped for dad’s throat. Instead, he disappeared up the fireplace chimney and escaped via some secret rodent route to safety. I tried to imagine his conversation with Mrs Ratty later that night. “What a palaver.  You go to your neighbour’s for a mince pie and what do yet get? A poker up your jacksie!”

‘The Wind in the Willows’ was never the same for me after that. I sat under that Christmas tree night after night, hoping ‘Ratty’ would return so that I could formally apologise. He never did. Clearly, tea and muffins at Toad Hall was a much better proposition.