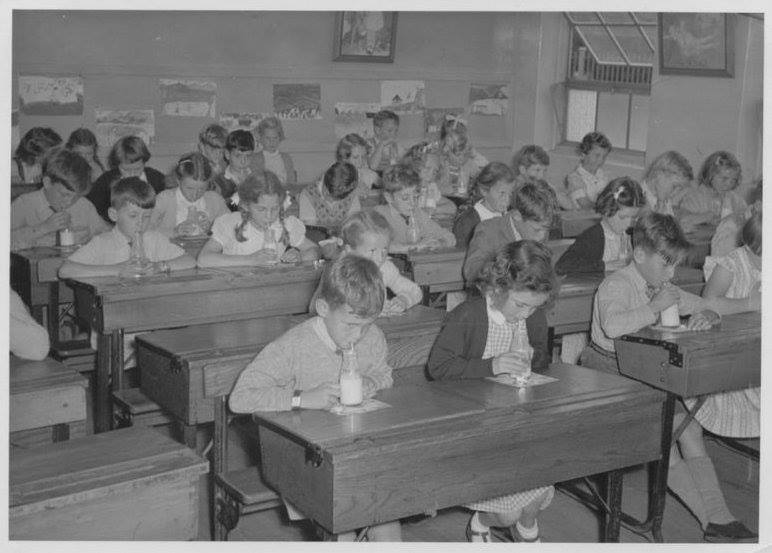 By Ken Rogers b- from a Liverpool Echo ‘Lost Tribes’ column

A journalist friend of mine from the Midlands was recalling an incident that happened in the 1950s when he was nine and doing his milk monitor duties at junior school. A large pane of plate glass fell out of a door straight onto his head.
He was taken to hospital to have stitches. There was no enquiry and no suggestion of suing anyone. He just went back to school the next day although his mum said he could no longer be milk monitor, presumably because it was just too dangerous!
On my first day in 1953 at the former Major Lester in Everton Valley, I excitedly climbed the steps to the Infant’s Hut, only for a cleaner to throw the dirty water contents of her mop bucket over the parapet, leaving me soaked.
Maybe this was a ritualistic welcome all boys had to endure? I sprinted home. These days there would be all hell to play with talk of compensation and litigation to get that cleaner sacked for assault and moppery!
Instead, it was a quick change of clothes and back to school with a warning to apologise and explain why I was late. Clearly, this school lark was not going to be straightforward.
I would also progress to the heady position of milk monitor and later headmaster’s phone monitor. We all shared these jobs across various terms. Milk Monitors had the uncomplicated task of giving out the bottles and tidying up after we had slurped our daily dairy treat before using our silver milk tops as makeshift flying saucers. What joy!
Phone monitor required sitting in the headmaster’s office for half an hour or so, presumably when the school secretary was missing.
These days some union official would come down on this practice like a ton of bricks, as if it was exploiting children and somehow challenging jobs. In reality, it genuinely boosted our self confidence and communication skills in a very simple way at a time when none of us had a home telephone.
I couldn’t wait for the big black Bakelite phone to ring on headmaster Arthur Corrin’s desk so, in my squeaky childhood voice, I could say: “Good morning, Major Lester School, can I help you?”
How exciting was that in an era when communication hi-tech for kids was two tin cans linked by a taut piece of string.
Here are some other school memories people sent me. Brian Rea wrote: “Me and a few others from my old school, Venice Street in Anfield, went to be lifeguards at the annual swimming gala as we had gained our bronze medallion in life saving. We were ordered by the teacher to jump from the balcony into the pool across the tiled floor below! Health and Safety? Not a chance, but we enjoyed every minute.”
Anne Carr remembers trying to escape from her infant department. She said: “The teacher grabbed me and picked me up. My head accidentally hit the wall-mounted fire extinguisher. I later told mum the teacher had hit me with it. Her reply was: ‘Stop telling lies.’
Tom Kirby said: “At a 2003 school reunion, we saw the old accident report books. One said: ‘Mary fell and banged her head. Bleeding slightly so wrapped a towel around it. She has gone home with her sister’.
Well Tom, as that old Commercial Union TV insurance advert used to say: “We don’t make a drama out of a crisis!”You know it makes sense.
My granddad’s simple answer for every ill – cold, cut or whatever – was a dab of Vaseline. I’ve still got this image of granddad Rogers with a blob by his nostrils to keep out the germs
Steve Dempsey recalled: “I was a milk monitor at Whitefield Road School. I’m 79 now. I had the post until I was sacked for bad time keeping. We would receive the cane after so many offences and there was always a punishment queue outside the headmaster’s office on Fridays.
“Our school used to donate comics bought by pupils to sick children in hospital. One Friday I thought I was being smart and bought a new comic and took it with me to the Head’s office on the day of my punishment. He thanked me and then gave me an extra one for trying to bribe him!”
Thomas Marshall turned up for school one morning and – after the register call – he was asked to go outside. He said: “My teacher asked about the spots on my face. I didn’t have a clue as I had got myself ready that day. I was sent home and mum was surprised to see me. I had measles!”
You know what to do for that, Tom. Yes, get the old Vaseline out. Seriously, though, we lived on a different planet when it came to our schooldays, but what fascinating memories?