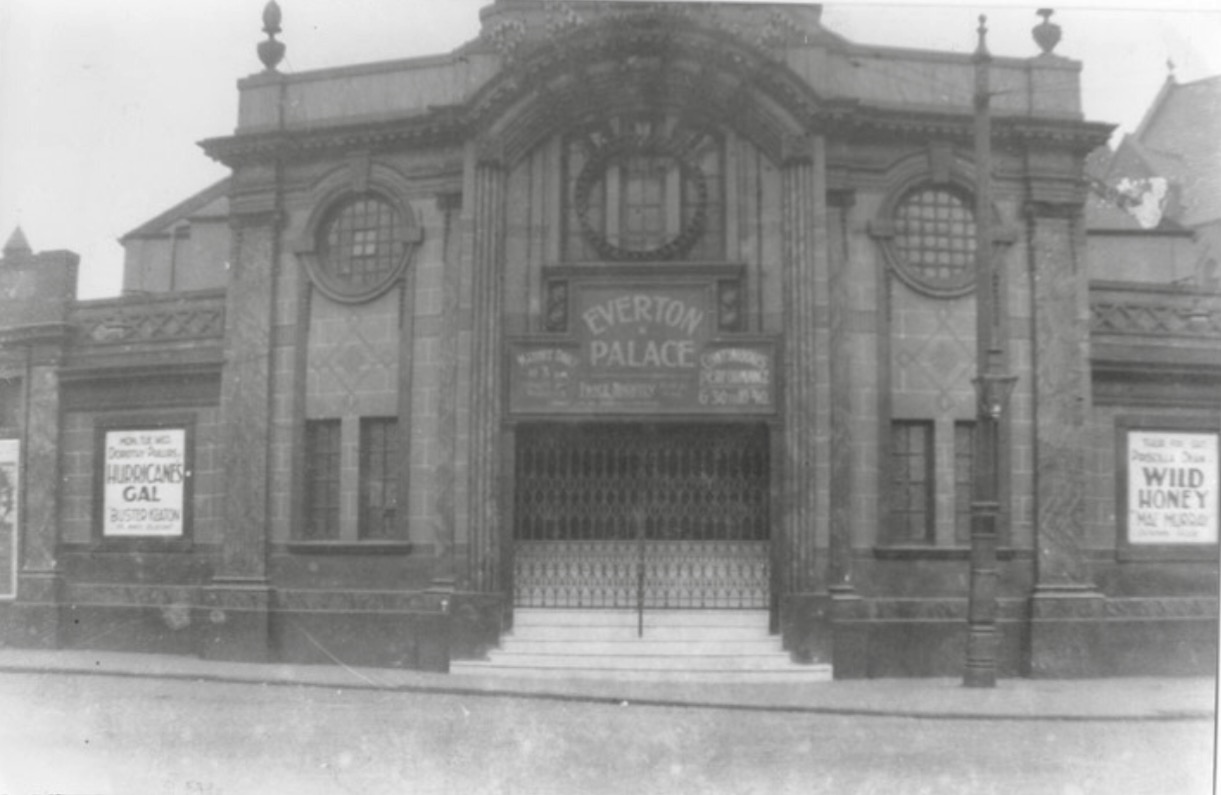 I always smile when I watch re-runs of that classic TV war series “Colditz” featuring, the notorious German castle and prisoner-of-war-camp Oflag 1V-C where  a band of  indefatigable Allied officers continually plotted and planned a series of audacious escapes during the Second World War.

As a youngster, born three years after the end of the hostilities, I always felt as if we were inspired to reverse the Colditz escape mentality every Saturday morning as an army of Everton and Scottie Road youngsters tried to break into the formidable, dark and ‘dangerous’ environs of our local picture houses – intent on sharing in the adventures of the super heroes who inspired us from the big screens.

In Colditz, a searchlight beam would sweep the courtyards and alleyways of the imposing castle, looking to capture any sign of an impending break-out.

In the cinemas of inner city Liverpool, the torches and eagle eyes of the uniformed usherettes would be scouring the darkness for signs of an impending break-in!

Suddenly a shaft of sunlight would pierce the darkness in the corner of the building, and kids would scramble in for a free show, disappearing into the shadows as torch beams flashed across the seats to try and identify the intruders.

It was all a game, an integral part of the show. After all, we were all fully paid up members of the ‘ABC Minors Club’ and as such were the future of the cinemas, although movie mania would soon be seriously threatened by the new entertainment wonder, a flickering box in the corner of every living room known as the TV.

But at the start of the 1950s, the cinema was still the king and queen of our entertainment world, not least in the ABC Cinemas that dominated every big British city.

ABC was established in 1927 by solicitor John Maxwell and by 1945 it operated over 400 cinemas nationwide and was second only to Rank’s Odeon chain.

ABC set up the first major Saturday cinema club for children, the ‘ABC Minors’. At the beginning of each Saturday morning session, the ‘Minors Song’ would be played to the tune of ‘Blaze Away’ by Abe Holzmann (1874–1939), with the lyrics presented on the screen with a bouncing red ball above the words to help and inspire the young audience.

Hundreds of high-pitched voices would be belting out the following as a prelude to every show:

We are the boys and girls well known as

Minors of the ABC

And every Saturday all line up

And shout aloud with glee

We love to laugh and have a sing-song

Just a happy crowd are we

We’re all pals together

We’re minors of the ABC

Let’s be clear. Going to the ‘flics’or the ‘pix’ to see a Saturday morning kids’ matinee was almost as daunting an experience as venturing into the tight confines of one of the caged Boys’ Pens at our famous city football grounds, where you took your life in your own hands amidst a screaming, heaving mass of teenage testosterone.

The cinemas, with their mysterious passages and staircases, snatched you off the streets on a bright Mersey Saturday morning and swept you up into the total blackness of a cavernous auditorium where, for a couple of hours, total anarchy reigned, interspersed by moments of sheer movie magic.

Kids will be kids in any environment, but plunge them into semi darkness with a license to cause mini mayhem whilst revelling in the adventures of their screen heroes and you have the recipe for a cauldron of excitement and action, on and off the screen.

My cinema super hero was Flash Gordon, matched only by my comic hero Dane Dare. I had Dan Dare wallpaper adorning the bedroom walls in our Everton terraced house and every night I played out a sci-fi adventure alongside Dan, defending Planet Earth from The Mekon, the super-intelligent ruler of the Treens.

This would take on a whole new meaning every Saturday morning when I visited either the Popular Cinema (The Pop) on Netherfield Road North or the Astoria on Walton Road where Flash Gordon had his regular big screen battles with Emperor Ming the Merciless.

Kids were captivated by these outer space adventures which unfolded week by week, always leaving us with a terrifying cliff-hanger.

Flash would be up to his neck in a giant tank of water. Ming would instruct his space age accomplices to slam the lid shut and we would see the water rising above Flash’s head with no means of escape. Then we would hear those words:

“Will Flash Gordon escape his watery Tomb of Death? Will our hero live to fight another day?”

Of course, the next week’s film would start with Flash up to his waist in water and always manipulating his escape from the furious Ming. But it was the uncertainty and sheer excitement of it all that kept drawing us back for our next fix of Saturday morning madness.

My father worked in a number of Liverpool cinemas and so I was able to go behind the scenes and witness the technicalities of the Projection Room. I always found cinemas to be ghostly places once their audiences had disappeared into the night, leaving the buildings strangely silent and empty while minutes earlier the sights and sounds of the movie adventures had been absolutely spell-binding.

When they eventually closed down ‘The Pop’ in the late 1950s, I can remember being one of an army of young local boys who could not wait to get into the empty and now derelict building, marauding up and down the old staircases and passageways and even climbing high up into the roof space.

I recall that two tramline joists had been exposed, stretching from the back of the cinema at roof level to a position high above what had previously been the big screen, probably thirty or forty feet in the air. With a knee on each of these joists, I edged forward to traverse above my former picture house domain. All the kids were daring each other to do it.

Those joists could have been rotten and we could have all plunged into the first row of the pit, but we did it in the name of Flash, Hopalong Cassidy, Roy Rogers and the rest.

I could almost hear the cliff-hanging teaser:

“Will young Kenny Rogers escape? Will he traverse the joists of death like his hero Flash before him and make it to Planet Everton on the other side? Don’t miss next week’s exciting episode of . . .  The Demise of the Pop Cinema, and life in the Magical World of the ABC Minors.”

Of course, many of the old cinemas could also be very basic and, in researching my book ‘The Lost Tribe of Everton and Scottie Road’ I found out that in the dark days of the Depression in the 1930s, it wasn’t just money that gained you entry into Liverpool cinemas.

My own father recalls going to the old Everton Palace in Everton Road and gaining entry by handing over a couple of jam jars, something confirmed to me by Terry Cooke, a fellow local author.

“There were two cinemas in our area one was the respectable ‘Roscommon’ where they had a doorman who demanded you had cash. Then there was the ‘Tivoli’ with its wooden seats. It was a deplorable place, but loved by many. They would let you in for three or four jam jars.”

The modern multiplexes somehow don’t cut it for me. It’s like watching a film in your living room.

A visit to the ‘pix’ from the Thirties to the Sixties was not just about the films, but rather an exciting, amazing experience, often in an art deco environment of true glamour. Sadly, we will never again see the likes of those spectacular Picture Palaces of the past.

Going to the cinema wasn’t just about the fantastic epic films that captured our imagination. It was very much an experience, equal to that of going to some of the great theatres.

The cinema builders ensured this was the case by building Picture Palaces that oozed with magic because of the sheer luxury and the décor.

Some of the souvenir programmes available at that time sum up the whole mood of going to the pictures in the Fifties and Sixties.

These publications were produced to support massive blockbusters like Ben Hur, Ryan’s Daughter, How the West Was Won, and My Fair Lady.

At the top city centre cinemas at this time, a souvenir programme was not made available for every movie. However, some of the really classic film productions clearly justified high quality printed souvenir programmes which became collectors’ items in their own right. They featured information on the production staff as well as the stars and gave an insight into how the films were made.

Many of the major films in this era were over three hours long and this inspired the practice of having a very civilised formal intermission during which cinema goers could have refreshments and discuss the quality of the performance before returning to see the final part.

Many of the cinemas were classic Art Deco with fantastic lighting and fittings, which added to the sense of luxury and occasion for everyone who attended.  The staff of course, would be superbly turned out in special uniforms.

It is little wonder that cinema goers felt special themselves.

Liverpool had its share of specialist picture houses. The Tatler in Church Street majored on cartoons and was a magnet for kids from all over the city.

The News Theatre on Clayton Square showed short and highly stylised news reels from the world famous Pathe News stable. These were the days, of course, before 24 hour news on the TV. People would be able to see footage of events like the Grand National or the FA Cup Final for the first time on any sort of screen.

The power of the cinema was highlighted by the fact that the Liverpool Echo front page, rather than being totally news-driven, was dominated by advertising, mainly featuring local cinemas.

The local cinemas in the Everton, Scottie Road and surrounding areas included