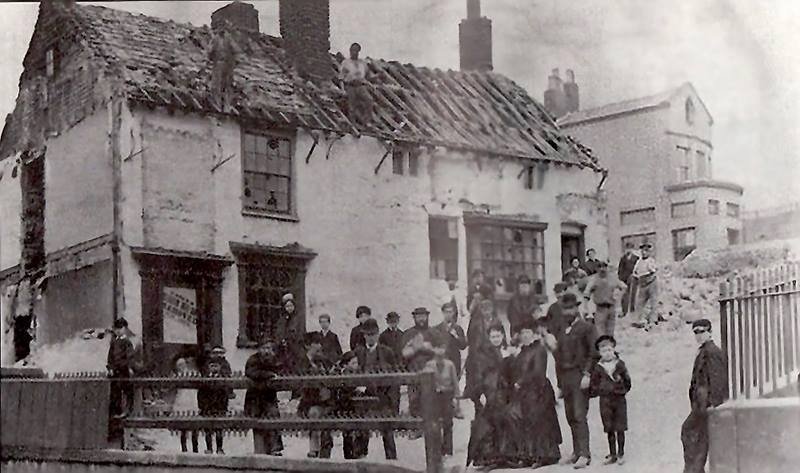 We all talk about the devastating clearances in the 1960s that changed the face of Everton forever, but the image here was ironically taken 100 years earlier, in the 1860s (1864 to be precise). It shows the famous Everton Toffee Shop between Brow Side and Netherfield Road South with a group of people apparently observing its demise.
Other Everton Toffee Depots/Shops would eventually emerge, inspired by the descendants of the original Toffee Lady Molly Bushell. One was on London Road and another on West Derby Road, a contemporary advert confirming the oft stated view that Everton Toffee was supplied to Queen Victoria. Intriguingly, you can add people like the Duke of Cambridge (Prince George) and Lord John Russell to this illustrious list. Russell was twice UK Prime Minister (1846-1852 and 1865-1866).
Everton Toffee, at this time, was manufactured by R.H. Wignall (late of the Old Original Toffee Shop on Brow Side by the Everton Lock-Up Tower).
Mr Wignall was the grandson of Molly Bushell, the original Everton Toffee Girl.
Depots/shops selling Everton Toffee also opened at 39 London Road (I’ve seen a picture of that) and 169 West Derby Road opposite the famous Zoological Gardens that were once a mere six minute walk from Everton Village, in the Boaler Street area.
Clearly, the West Derby Road shop was positioned to pick up trade from the aforementioned zoo (Liverpool’s first and one of six). This one was opened in 1833 and closed in 1865. It had a monkey house, an elephant house, a bear pit, an eaglery, an aviary and a waterfowl pond. No, it never closed because the locals were frightening the animals in the area that ultimately housed the legendary Grafton!
Victoria came to the throne in 1837. It would soon be possible to send and export Everton Toffee to any part of the world so it was quite a business in its day.