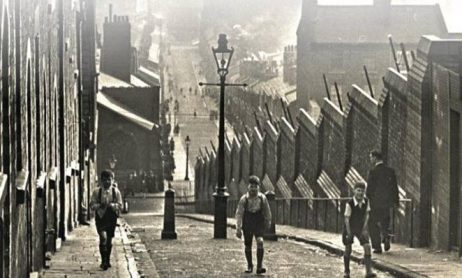 WHAT THEY SAID ABOUT THE THEATRE PRODUCTION:

Staging ‘Lost Tribe of Everton & Scottie Road – The Play’ in the Capstone Theatre, located in the West Everton area, was a perfect fit of production to venue.

It was great to be able to invite local people into ‘their local theatre’ for a piece of drama and social history that clearly moved, entertained and engaged them.

I’m delighted that the show was such a success and would be very happy to continue to be involved with the project as it develops beyond its three initial sell-out performances.

I brought a group to watch the ‘Lost Tribe of Everton and Scottie Road’ production and we all enjoyed it immensely. My cousin and her friend are 82 and live in Ellesmere Port (on the other side of the river to Everton) but they still look on themselves as being part of the ‘Lost Tribe’. For them to have been able to watch this play from the front row and see something they could totally relate to in a very special way was excellent and memorable.

This was ‘our best event in 2018’. The rest of our group, including myself, were delighted with the performance and sang along with the ABC Minors song in the local cinema scene. We even cowered at the sight of ‘Ming the Merciless’ from the old Flash Gordon footage.

To see the evidence in your finale of housing rejuvenation in the Everton Park area and the fact that Hope University has based a first class theatre within the creative campus in Everton all bodes well for the future.

Ken Rogers, Mike Howl and the acting group have had an immense impact through their passion and dedication to the community. Very well done and best wishes – or should it be ‘break a leg’- for the future of the project.

What a great evening. Many thanks for all the hours of work that must have been put in – preparation, creativity and expertise. It was a great production.

The play was the talk of our service at St Peter’s. People loved this production and it even featured in our prayer topics for the week as a reason for thanksgiving. This play provided such positive messages about resilience, relationships and the folly of disrespect and not listening to the people most affected by decisions about our area’s future.

‘Lost Tribe of Everton & Scottie Road – The Play’ was a great triumph for the local community . . .  a triumph of hard graft, research and writing, not to mention detailed planning and execution.

Across the three nights it was also a triumph of recognition, warmth, tears, laughter, pride, love and delight.

Well done to you and your team. We now look forward to the next charge into battle on behalf of Everton, its ‘Lost Tribe’ from the 1960/80s clearances, its children – and the future we are working for.

My brother and I went to see ‘Lost Tribe of Everton & Scottie Road – The Play’ and it was brilliant. It brought back many memories for both of us. We lived in the Ashfield Gardens tenements. My brother was mad on 1950s cinema hero Flash Gordon and so the scene involving the Saturday morning matinees was great. We used to go the Gem picture house.

We moved to Kirkby before Ashfield Gardens was knocked down during the clearances. My auntie and uncle lived in Everton’s Cornwall Street. He was a Protestant and she was a Catholic, another subject you covered so well.

I was in tears during your finale when actor Rosie O’Neill, Peggy in the last house standing in Roscommon Street, sang the song about her personal memories. It was very moving.

Angela Roberts: Just in after watching ‘Lost Tribe of Everton & Scottie Road – The Play’. It was fantastic. I laughed, I cried. Thank you.

June Taylor:  Congratulations. The play was fantastic and the actors were brilliant. I would have loved a DVD to show friends who couldn’t come.

Lynette Moorcroft: Well done with the ‘Lost Tribe’ play. It was a great night with a very emotive song at the end.”

Linda Sanderson: I saw the Saturday night performance and it was excellent – the production, the actors – everything!

It brought back many feelings I had forgotten about. I was so happy I got to see this play.

Phil Dickinson: I really enjoyed the ‘Lost Tribe’ play. It was fabulous and you did the people of Everton proud.

Paul Dove:  I really enjoyed the show. It was a fantastic evening. Congratulations on a big success. The play had a bit of everything, and the way it came together was superb. It must have made you proud. Look forward to seeing a follow-up in 2018.

We would just like to say how much we enjoyed ‘Lost Tribe of Everton &b Scottie Road – The Play’ on Friday, 3 November. It was funny and nostalgic, by turns. Best of all, it was entertaining.

It took us right back to when we were children. The actors were all marvellous and we were so glad we got the chance to see this production, especially at the Capstone Theatre which was a first for us.

The closing song written by Ken Rogers was very emotional, so thank you for a very enjoyable evening.

Lost Tribe of Everton & Scottie Road is a new play by Creator and Co-writer Ken Rogers and Co-writer and Director Mike Howl that captures the folklore of a 1960s slum clearance programme of almost biblical proportions that all but wiped out the tightly-packed terraced houses of Everton and its famous neighbour, the self-styled independent republic of Scotland Road, when over 125,000 people were dispatched to new towns and council estates.

Despite the promise of heavenly streets in the sky, those who remained suffered high-rise hell although thankfully in a true circle of life, Everton would ultimately re-emerge with a determined new focus that was very much down to its people.

With narration from Rogers, we are introduced to a variety of scenes exploring different aspects of community life as the events unfold around our characters. The foibles of family life are brilliantly pictured through couples Mary (Ciara O’Neill) and Reg (Andrew Games), and Margaret (Geraldine Moloney Judge) and Billy (Frank Kennedy), as we see the travails of overcrowding and pawn shops, whilst the children just play, with their games and cinema trips beautifully captured through Jazz Jago, Daryl Blackburn, Faye Draper, and Emmett Meehan, in scenes which resonated strongly with the audience.

But the shadow of what was to come weighs heavily in the background as Alderman Norton (Michael Sanders) and Dr Davenport (Murphy Rhodes) set into play the plans that would devastate an area despite the protestations of local Councillor Jones (Adam Byrne) and local priest Father O’Leary (Howl).

There was good use of AV and photographic stills put together by APG Films which provided alternate links between scenes as well as reinforcing the reality of what we were being told. I particularly enjoyed the interviews with those who had been through it all and which allowed us to touch upon matters such as the religious bigotry that came to life maybe twice a year yet soon dissipated; the spirit of locals trying to fight the proposals with the support of two Bishops; the memories of Sunday afternoon strolls with the men and women in their finery; and the many pubs that littered the area: I now know why not to have a fight before Mass.

I think it’s important to emphasise here that a community stretching back some 100-150 years was ripped apart overnight in the pursuit of planning progress, yet some 25 years later the progressive tower blocks had failed and were tumbling themselves. The original horror was echoed in the closing monologue and song from Peggy (Rosie O’Neill), one of the last to be forcibly moved, but cleverly contrasted by the drone footage of the area as it is today, kindly provided by Dennis Outten. It is much testament to the people of Everton that tonight was the perfect blend of memories amidst a future filled with hope wrapped in the warmth and spirit of its community – a story that resonated through the strong performances of the cast and demands an extended run.