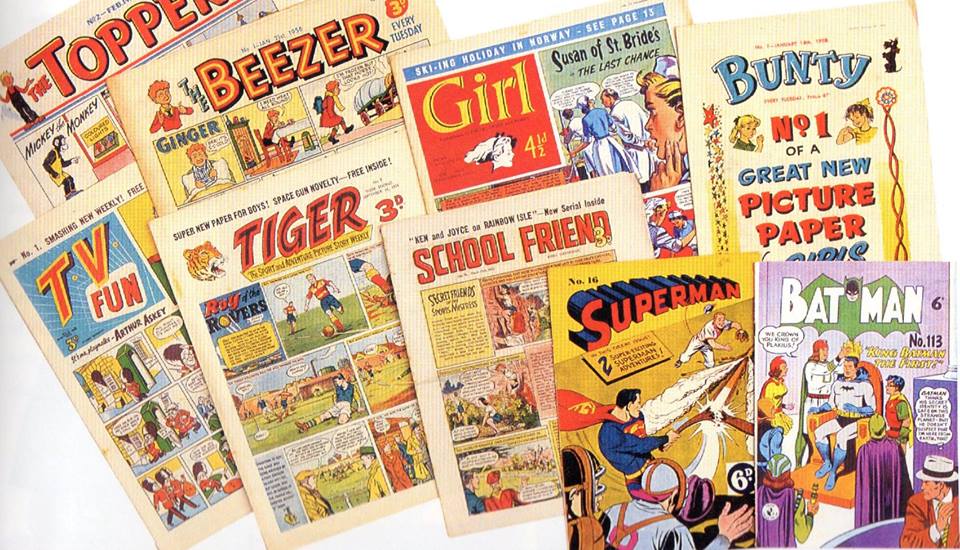 By Ken Rogers
I was an avid comic reader in the 1950s as were most kids. The choice was huge for boys and girls, some of those titles featured here. All of the money I earned on my Echo paper round was spent on publications like The Dandy, The Beano, and The Topper. I ultimately progressed to my favourite option, The Hotspur.
Whilst remaining a comic fanatic, by 1960 I was also purchasing colour magazine editions like ‘Knowledge’ that enabled us to build our own encyclopaedias.
I still have two complete volumes that came with free hardback binders. These beautifully illustrated part-work classics fired my imagination in ancient history, the great cities and civilisations of the world, the solar system and so on.
It was ‘Knowledge’ that gave me a lifelong passion for the Romans and last week I completed another tick on my bucket list when I visited the remarkable beachside amphitheatre in Tarragona, Spain along with the remains of the nearby circus where chariot races once thrilled crowds of up to 30,000. I’ve always sensed that I was a Roman in a previous life!
As kids, we could never have afforded the more famous and comprehensive Encyclopaedia Britannica which printed its bound volumes up to 2012.
I picked up a story this week about the first issue of The Beano. Priced tuppence in July, 1938, it recently sold at auction for £8,700. Dennis the Menace, Minnie the Minx, the Bash Street Kids, and Roger the Dodger should all be demanding a pay rise, while anyone who was once snooty about Lord Snooty should stand in the corner wearing a large dunce’s hat.
Here is a lesson for you. If you collect first editions of anything, keep them pristine and never throw away those free gifts. That original Beano teased kids with a free ‘whoopee mask’ which, if kept, would have doubled the auction value.
Specialist comics for girls included School Friend (1950) and Girl (1951). There was also The Bunty and Girls’ Crystal. School Friend featured ‘Ken and Joyce on Rainbow Isle’. Will any modern kid ever be called Ken, or Joyce for that matter? However, Arthur, George and Harry are back in vogue so I live in hope. Anyway, I very nearly became Roy, after my cowboy hero.
Incidentally, the record comic auction price was for a first edition of The Dandy from December 1937 which went for £18,500 in 2004. Desperate Dan is not so desperate anymore and Korky the Cat has clearly proved a genuine corker!
Get up in the loft and start your own treasure hunt.