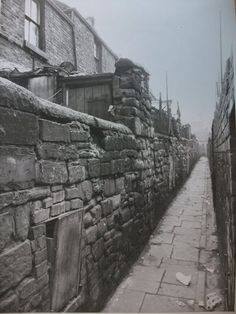 By Ken Rogers
Those of us from Liverpool’s Victorian inner city areas all had back entries like this. As a journalist who often focuses on the 1960s clearances that dramatically changed some of our most famous districts forever, I have to continually take a reality check to ensure I’m not looking back through rose-tinted glasses.
Giving a memory talk recently and discussing the community spirit that existed in my old terraced street when I was a kid, a man in the audience put his hand up and said: “Ah, but you all had rats and infestations of mice!”
It wasn’t so much what he said, but how he said it. It was an unspoken equation: “Rats must equal slums which in turn must mean insanitary and dirty conditions.”
I have no doubts whatsoever that problems with vermin had, at one time, kept the Corporation’s Sanitary Inspectors extremely busy across Liverpool’s inner city areas, but fastidious cleaning routines and the late 1950s introduction of refrigerators to working class properties increasingly restricted Mickey Mouse to the Saturday morning matinees at the city centre Tatler Cartoon Cinema.
Incidentally, regardless of whether you live in terraced street land, a council estate or a smart suburb of detached houses, scientists confirm that you are never more than 100ft away from a rat, but will rarely if ever see one. Ratty clearly likes his own company which is fine by me.
Rose tinted spectacles still off, I often reflect on the close knit nature of the old communities where people looked out for each other in a much more instinctive and caring way than we possibly do now.
Ironically, it was the very design of the terraced streets of yesteryear that demanded community cohesion, something that was hammered home to me recently when a lady called Pat Bradley (nee Dutton) provided a remarkable 1955 picture essay, the original work of her father Patrick Dutton who loved photography.
Patrick would click away on his old box Brownie, pointing the lens at some of his street’s more senior citizens as they sat on their front door steps watching the world go by, kids at play, and ladies scrubbing their steps and polishing their front door brasses so you could see your face in them. There were babies in their prams and people generally interacting in every way.
All that disappeared the day the bulldozers demolished Carson Street and hundreds of others as the 1960s clearances gathered pace. Thank goodness Patrick Dutton captured that day in the life of his old neighbours. He couldn’t have realised that 60 plus years on, he would be helping us to remember ours.
To view some of his images use the Lost Tribe street search and key in: Carson