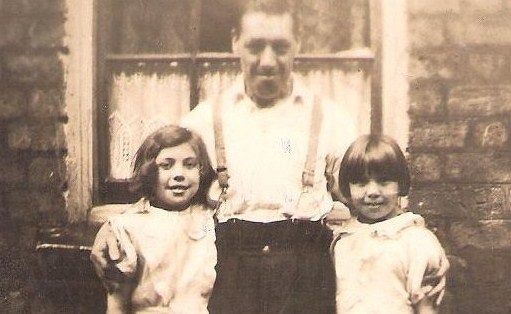 By Ken Rogers (from the Lost Tribe of Everton series).
How many of you had pictures taken in an old terraced street backyard with its familiar whitewashed walls and tin bath hanging up on a nail? Ours also had a kennel for Dinkie the dog, a proper mut who regularly roamed the streets of Everton with his mates. No pampered designer pets in those days. Of course, the backyards also contained the family thrones, better known as the outside lav.
This picture, taken in 1940 with a box camera that produced a tiny negative, shows my granddad Adam Wareing proudly pictured with his two daughters, my mother May and her younger sister Ada,
Many have old images like these and they are are genuine family treasures.
These days people record their lives by the minute, courtesy of the ‘click and capture’ technology offered by mobile phones. Previously, photography was never easy. Many of you might have owned a basic box camera that forced you to look down through the lens rather than straight at your subject matter, a tricky discipline.
Of course, before taking a photograph you had to load your camera with ‘film’ – a task that would have our grandchildren looking blankly and declaring: “What’s that?” They would be equally stunned to grasp that this key component had to be bought, usually from a local chemist, and that you were restricted to 12 to 24 shots, not the limitless ‘point and snap’ capability of modern phone cameras.
They would be equally aghast at having to return to pay for those films to be developed. This process would take at least a week and several prints might be irritatingly out of focus, but what joy anticipating the end product.
The Kodak Brownie 127 that emerged in the 1950s was more functional and by the 1960s our new Instamatics were finally enabling us to load our cameras courtesy of a simple cassette with no more fiddling to position your film on a ratchet mechanism.
For old time’s sake I still urge people to “look at the birdie” and say “cheese” to encourage a smile. I’m clearly from Planet Kodak which is why, even on the most colourful sunny days, I still see things in stark black and white.